“The Piano Tune” by Peshay is undoubtedly one of the finest productions to come out of the early drum and bass movement. It’s a blend of uplifting chords, piercing keys and rhythmic amens managed to cross the boundaries of a scene that was becoming fragmented. Similar to the Foul Play remix of “Renegade Snares” it managed to achieve the rare success of becoming an anthem at big events whilst retaining its cult status within the “intelligent” scene.

Played exclusively on dubplate by LTJ Bukem and an elite band of DJ’s in early 1994 the track was eventually released on Good Looking Records in 1995. The label correctly states it was written and produced by Peshay but omits it was Alex and Danny from Flytronix who engineered the tracks. Recorded in their Beccles studio located at the bottom of their garden “The Shed” spawned a wealth of breakbeat classics with “The Piano Tune” being one of the most instantly recognisable.

We caught up with Alex to get his thoughts on the track more than twenty years on as well as details of the recording process. Alex also talked to Peshay about his memories of the session and his approach to making music. 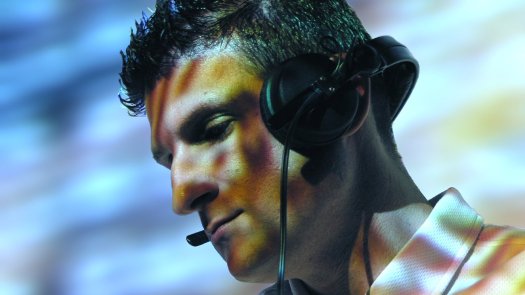 Alex (in his own words) on working with Peshay

During the early 90s, Danny and I engineered for a few producers. It was fun and taught me so much. We engineered about 6 tracks for DJ Peshay (Paul).

Peshay is awesome, he would roll into the shed, lighten up the mood with conversation and banter then pull out a bunch of floppy discs and say: “Right then…” And off we went!

Paul has great vision. We would listen to the samples while he spoke about his ideas for style and arrangement. These were firm ideas that were flexible enough to incorporate what Danny and I could achieve programming.

From a Friday start to Sunday night we would get 2 tracks done… Amazing! “The Piano Tune” was one of those tracks…

Alex reacts to hearing “The Piano Tune” by Peshay

I’m listening to it now and I think I can hear a dodgy loop point on the intro pad! Paul started playing the piano riff sample in the AKAI S1000 on the Korg M1 keyboard over MIDI (I think it’s a D dropping to a G?)… The string used to layer the piano and pad is the “Universe” preset from the Korg M1. Then there’s some superfly Amen programming leading to a breakdown…

Amen drops at two minutes fifty seconds. Lots of edits with gated kick and snares at the end of the four and eight bars. As I recall we took this idea from another track Paul had done with someone else! You simply reduce the note length for each hit you want to gate. This was done manually on the Alesis MMT8 sequencer.

After thirty-two bars another pad comes in and is then joined by another sound. Again, Paul had this idea before coming to the studio and would even have alternatives should one idea not work. Quality.

The pad then switches to Korg M1 Universe. The bassline is a sample from a Roland TR808 kick drum. Super popular at the time… I don’t remember if Paul brought one with him or used one of ours? Then, middle bridge out to “Think” break. Sounds very Danny on the edits… but also slightly reminiscent of the “Half Steppa” programming.

Piano riff returns for the outro and then last drop before a stripped back mixing outro.

Alex on the recording session

It was quite a joy to do some Amen programming. Danny and I had made a conscious decision to not use it in Hyper-On tracks. By the very early 90’s we thought it had been completely rinsed! Little did we know…!

Now, Paul is a Producer rather than an Engineer/Programmer. As such we sometimes came across communication problems as you do when you work with anyone. When it came to discussing drum programming we came up with something new.

Paul would often conduct the drum edits using his finger to trace a rhythm through the air following the shuffle. One time I was absentmindedly rolling an A3 poster across itself, nice and tight like a roach. I ended up adding a bit of tape to the end and a Bic biro lid to the top, it was quite sturdy.

The next thing I know Paul had got hold of it and with some enthusiasm started conducting the beats! It became known as the “Shuffle Stick” and as I recall was used on many sessions by both myself and Danny!

Why did you choose to employ Danny and me to engineer for you?

I met Danny at a leisure centre in Norfolk somewhere, can’t remember exactly. It was a live gig that you were doing and I was also Dj’ing on the same lineup. It was 1991 or 1992 I think? I always liked the music that you guys were doing at the time as Hyper On Experience and after talking to Danny for a while I decided to ask if he was interested in doing some engineering for me. He said “yes” and that’s where it all began really.

Who else had you worked with before us?

I had worked with people like Bay B Kane and Dave Charlesworth from ADR Records at that time.

What did you think about the way we worked?

I thought it was really good, you both understood exactly what I wanted so the results were great and I was happy. We also had a great laugh and that’s one of the things that I remember very well constant jokes!!!

What do you remember about the equipment in the Shed?

The equipment was basic but that didn’t hinder what I wanted to achieve with the tracks I was doing and the sound quality was good for the time.

How did you approach producing a track? Where did you get the samples?

I had been planning a rave type piano track for a little while as I was playing out at the time regularly. At that point, I had already made tracks for Reinforced Records, ADR and Good Looking amongst others. For the B side, I wanted to create a house type vocal breakbeat track which came out as the “Vocal Tune”. I can’t remember where I got all the samples from at that time, but a mixture of places and from different genres of music. I looked for the kind of samples that I wanted to use and had it in my head exactly how I wanted to do it. Of course, at that time we were all relatively inexperienced in what we were doing but I knew exactly how I wanted it to sound and you guys helped me to get it as I wanted it.

What other tracks did you have engineered here?

I can’t remember exactly but I did a few more with you that came out on ADR Records a bit later on.

Do you remember the cat, Benson?!

Yes, I do remember Benson, that was a funny cat that had a really good character!!!

What do you recall about Beccles?

I remember it being a quiet sleepy place with really friendly people. I used to enjoy going up there to work on tracks, especially after a crazy manic weekend of travelling to gigs and all the noise and whistles. It was the perfect place to get away and work!!!

Do you remember the Shuffle stick?

What other tracks were around at the time that may have influenced you?

There were tracks around but I can’t remember names and labels. Reinforced Records and Moving Shadow were the labels that were amongst the front runners at that time…

I’ve worked with many great Producers over the years and Peshay easily taught me the most regarding producing a track. I used to just experiment with rhythm and sound but now I prefer to have an idea of what I want to achieve before I start a track.